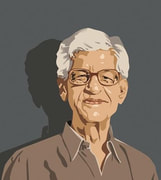 In the memory of pioneering business historian Prof. Dwijendra Tripathi, NSRCEL at Indian Institute of Management Bangalore organized a series of mini-lectures by Prateek Raj titled "Evolution of Business and Markets" in October 2018. The lecture series focused on how businesses and markets have evolved over time. The lecture series is structured into three interrelated lunch seminars focused around the evolution of businesses and markets, and the role of institutions, culture and technology in their evolution.

Lecture 1, 22nd October 2018
Evolution of Business (Network and Hierarchies) ​(slides) (notes)
Lecture focuses on how business was done in the past, and how could businesses overcome frictions of information asymmetry and moral hazard. We first explore the role of networks and hierarchy in shaping traditional and modern business, and then discuss the historical evolution of the firm, from individual merchants and guilds to large multinational corporations. We then focus on evolution of business in India following the works of Dwijendra Tripathi.

Lecture 2, 26th October 2018
Evolution of Markets (Cronyism and Capitalism) (slides) (notes)
Lecture focuses on the historical emergence of the modern impersonal markets, and their promised benefits in comparison to traditional systems of business. We discuss the perennial challenge markets face from monopoly power, political capture and crony capitalism. Given the historical context, we discuss the historical significance of liberalisation in India, and the opportunity that markets bring, and the threats crony capitalists pose.

Lecture 3, 29th October 2018
Forces of evolution (Institutions, Culture and Technology) (slides) (notes)
Lecture focuses on the long-run factors that drive the historical evolution of business and markets, focusing on the importance of institutions, culture and technology. We discuss the importance and limits of formal institutions, the role of trust and cosmopolitan culture, and the impact of communication, transport and mass-media technologies. We then focus on the necessary institutions, norms and technologies in the 21st century that will enable the emergence of accesible and cosmopolitan spheres of economic and social exchange in India.

Evolution of Business
The first set of papers begin with a basic question- how was business done in the past? The first paper by Greif (1989) looks at 11th c. Maghribi traders and highlights the role a dense network of relationships played in their business. The next paper by Kadens (2011) questions the primacy given to reputation in credit networks, and emphasizes the importance of reciprocity and confidence in medieval lending networks. The next paper by Kieser (1989) discusses formalization of business overtime, from informal craft guilds to formal markets. The next paper by Chandler (1992) looks at the concept of a firm within the context of business history. The final paper by Lamoreaux, Raff and Temin (2003) revisits Chandler’s hypothesis of management being the visible hand, and highlights the broad set of tools that firms have to coordinate activities beyond markets and hierarchies. The assigned book by Ogilvie (2011) studies the history of merchant guilds of Europe during the 2nd millennium, and highlights the tension between social capital and anti-competitive behaviour.


Role of Networks and Norms
The next set of papers emphasize the central role of networks and norms in business. The first paper by Stigler (1961) highlights the role of information in the economy. The next paper by Bernstein (1992) looks at the international diamond trade, and its use of private order and its networked nature of business. The next paper by Burt and Burzynska (2017) looks at social networks in China, called guanxi, and studies how closely do they resemble and differ from the standard understanding of social network theory. The next paper by Milgrom, North and Weingast (1990) looks at medieval trade, and describes the role of private judges in regulating reputation in medieval fairs. The next paper by Ellickson (1986) studies how order is maintained without the reliance on formal institutions. The assigned book by Saxenian (1996) studies the role of networks in the rise of Silicon Valley.


Evolution of Markets
The next set of papers focus on the structure of markets. The first paper by De la Croix, Doepke and Mokyr (2017) shows how underlying structure of a society can influence the rate of technological progress in the society. The next paper, by Greif and Tabellini (2017) compares Chinese clan based society to Europe’s city based society and emphasizes the relative ease with which market based institutions could emerge in Europe. In the next chapter Gelderblom (2004) traces the rise of modern markets in Northwestern Europe. In the next paper Raj (2018) develops a theory about the factors that led to the rise of markets and decline of merchant guilds in Northwestern Europe in the sixteenth century. In the next paper, Rajan and Zingales (2003) show that historically, market development was not unidirectional due to influence of powerful incumbents who politically resisted reforms that increased the competition they faced. The assigned book edited by Padgett and Powell (2012) provides an organizational and historical perspective of how organizations and markets evolve, though a series of historical and contemporary cases.

Book: Greif, A., 2006. Institutions and the path to the modern economy: Lessons from medieval trade. Cambridge University Press.


Role of Culture
The next set of papers study the cultural ingredients that make functioning markets. The first paper by Guiso, Sapienza and Zingales (2016) shows the legacy of medieval city republics on civic capital, and its effects on development. In the next paper Bloom, Sadun and Reenen (2012) document how modern businesses are more (less) centrally organised in countries of lower (higher) trust. In the final paper, Cantoni, Dittmar and Yuchtman (2018) provide new insights into Weber’s protestant ethic hypothesis and showing how the protestant reformation led to a greater secularization of Europe. The assigned book by McCloskey (2016) discusses the role bourgeois culture and values in rise of the modern world.


Role of Technology
The next set of papers study how technology influences the market? The fist paper by Malone, Yates and Benjamin (1987) studies the impact of communication technology on markets and hierarchies. The next paper by Donaldson (2018) studies the impact of railroad transport on integration of Indian markets in the late colonial period. In the next paper Dyck, Moss and Zingales (2013) show the impact of muckraking newspapers in passing of seminal market regulations in the USA during the Progressive era. The assigned book by Mokyr (2002) looks at the factors that gave rise to a knowledge economy in Europe and its effects.


Some Debates in Economic History
The final set papers enlist some key debates in economic history. These debates include the significance of merchant and craft guilds, the role of formal and especially legal and political institutions.